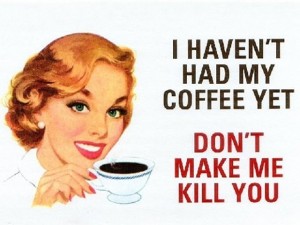 Sunday Morning and the Coffee is Perfect!

A perfect cup of coffee is really one of life’s small pleasures. Can set the tone for the whole day. Bliss!
Doing laundry, going to clean the house a bit after I finish being a slug for a while. It is Sunday morning after all and I am entitled to a bit of laziness.
I recently caught on cable the movie Pirate Radio. Enjoyed it! I’m not one of those people who looks for a deeper meaning and hidden metaphors it was just a good movie, held my attention and kept me entertained. I especially liked the end credits and how they displayed various rock-n-roll album covers from over the years. I will probably go check out Amazon for the soundtrack.
The Sickness (Ry) is currently inside and I have just introduced her to the miracle that is Vick’s Vapor Rub. Hopefully that works and helps her out a bit. Summer colds suck!
I have been thinking of making a bucket list. Might be fun, might just stress and depress me if I don’t actually accomplish anything on it 😉 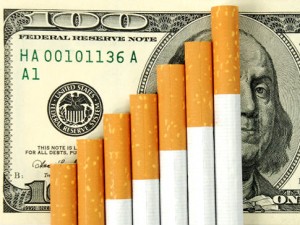 Do we get vaseline with this?

The Legislature on Monday night narrowly approved boosting the state’s tax on cigarettes by an additional $1.60 – to a national-high $4.35 a pack. Factoring in city and federal levies, a single pack is taxed to the tune of $6.85, which translates to a counter price of $12 – $13 for New York City smokers.

I mean really now. The hypocrisy of this whole thing is laughable. If you’re doing this because you believe people will quit smoking and be healthy than how does that help your budget? It wouldn’t.  How about you actually do your jobs well and maybe the budget wouldn’t be such a mess. I seldom get remotely passionate about anything to do with politics but I can promise I have made note of who voted for this jackass plan and will definitely vote against them in the future. It’s getting ridiculous now.
Read more: http://www.nydailynews.com/news/2010/06/22/2010-06-22_nail_in_coffin_legislature_oks_raising_cig_tax_160_to_us_high_435_a_pack.html#ixzz0rdU7FCos

Poor is the man… Justify My Love Video

So I was browsing Youtube (imagine that) and ran across Lady Gaga’s new Alejandro video. I’m just not into her stuff, doesn’t move or touch me in anyway other than that I usually think this has all be done before and was done better. Perfect example… while watching the video all I could think of was Madonna’s Justify My Love. I remember having to go out and buy the VHS tape because we couldn’t get cable in the Bronx yet, not as easy to find on the Internet back then either. Anyway Madonna just nails it, no question. I am 100% straight and watching the video for Justify My Love even I’m like wow she’s hot, the scenes are hot, being bisexual is hot. Lady Gaga… doesn’t inspire me to carnal thoughts just makes me laugh. Kinda like unzipping his pants and think the words Trouser Weasel….